Seeing Rising Waters this week, the exhibition about Hurricane Sandy at the Museum of the City of New York, encouraged me to take this photograph.

On 1st Avenue at 99th Street this building was flooded by the East River surge, caused by Sandy, and has not been used since. In fact FDNY were the last people I saw enter the building on the night of the storm. For a while there was a notice on the door warning people not to enter. No one in the neighborhood knows why it is just sitting there empty but, from the outside, seemingly in perfect condition. 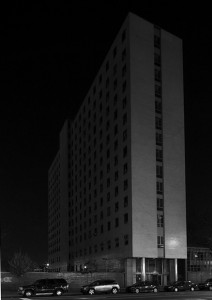 In such an illuminated city as New York it is very odd to see such a large building with not a single light on at night.