I am so excited to be heading back to Reading (UK) next month for the reunion exhibition – Reading: A Start & A Return Excited to have the time to see old friends, make new ones, to talk photography and to explore Reading photographically again.

For this fortnight’s photo I am posting an old image from 1980s Reading. I saw this ARTICLE about the gas holders I photographed there and it made me wonder whether the one in my photo is there now or will be next month.

They always say you can never go back, but when you have a link with people or place it’s like you just stepped away and when you return you’re back to where you belong. Places change physically, people move away or lose touch, but there’s still enough to make you feel like you’re home. Even after 30 years. 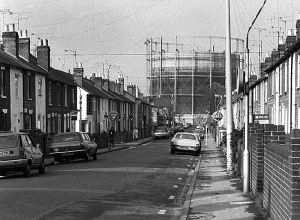 A homecoming 30 years in the making.

Thirty years ago I left Berkshire College of Art and Design after two intense years of photography. Photographers, artists, designers and academics gave me a grounding in photography theory and practice and set me up with the skills to pursue photography as a career.

So much has changed since those days with the technology, the career options and the closing of art colleges, including BCAD. But, even though I have had to learn a new set of digital skills,the analogue knowledge I was taught and practiced continues to be relevant.

To mark the passing of three decades I am joining with some of my fellow photographers from BCAD to put up a small exhibition of past and present work. It’s an opportunity for us to hang out in the gallery, reflect and talk photography and life. We hope you’ll visit and share your photography and thoughts with us!

The gallery itself is on the Kennet river, a stone’s throw from the site of BCAD, now Reading College, on King’s Road. Whilst the exhibition is on I hope to spend some time exploring the same streets I walked and photographed 30 years ago. I’m planning some casual photo walks maybe you will join me.

For more information please check out our exhibition website where you’ll find directions and details of events as they are added or send me an e mail.

You’ll also find the photographer’s links to their websites, twitter and email. We’ll be tweeting under the hashtag #readingreturn. 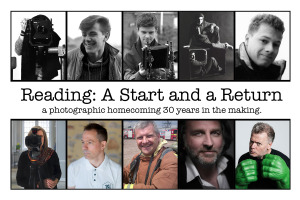 I’ve been busy lately with my project Gone. Now? and getting ready for the exhibition this summer in Reading and for this fortnight’s photo these worlds seem to have converged.
This image from my archive blends my current themes, the 1980s and urban change.

Photographed in 1989 on the corner of 42nd Street and 8th Avenue. looking south,.
The Port Authority bus terminal is to the right and an empty lot being used as a car park is on the left as we look from the NW corner of 42nd & 8th to the SE corner.

Shot on a wet, dark day, the two images paired here are taken moments apart as the crush of people cross the street and then gradually thins out.

Today there is a big glass tower where the car park used to be and the block behind that has the New York Times building. It’s not just the built environment that has changed though, the news stand was advertising their stock of Film and Cassettes! 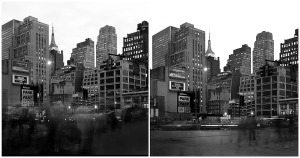 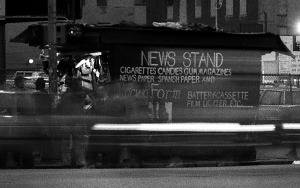 I like to ride the bus. Early morning, pre-dawn, and late at night. The M15 is my bus of choice. Down 2nd Avenue and up First. There’s not so much traffic at 5am and it’s actually quicker than making my way to the train and then waiting for one to arrive. More importantly, unlike the subway, there’s a view. Mind you, for a city that supposedly never sleeps, the M15 route has a surprisingly dark, slow view. I sit morning after morning, enveloped by the darkness, my reverie broken occasionally by neon signs and 24 hour bodegas catching my attention. So, I decided to get off the bus and begin to photograph, in the dark.

Although my initial visual interest was in the dark emptiness that made up the route I got seduced by the glowing neons that popped forcefully out of the night and so began to photograph them. On March 26th though I changed my mind and stopped. On Second Avenue at 7th Street there was an explosion that demolished three buildings and two people’s lives. After the initial shock and thoughts for those affected, I cynically thought that this would be a wonderful opportunity for some real estate developer. Instead of 100+ year old, low rise buildings with tens of rent stabilized apartments, there could be a big building with 30 floors and MARKET RATE apartments.

Back on the bus, I continued looking out of the window and realized that the darkness was not just a sleepy night. It was emptiness I was looking into. That’s why it felt so different from the daylight hours when people rushing about distract you from the urban landscape. There were gaping holes in the urban fabric. Empty lots. Some empty for years, not even noticed anymore. Buildings knocked down and land held until its value begins to rise. Buildings with residents and businesses, there one minute, gone in the blink of an eye. Grand plans for new builds, some will materialize soon, others, maybe not.

Of course it’s not just on the M15 bus route, the city is a constantly evolving building site. But this is my usual route and so I decided to keep track of what’s going on. I photographed each empty lot that appeared to be unused or in the very early stages of being built on. From the start of the M15 route at 125th Street and Second Avenue down to the bottom of Manhattan, the Staten Island Ferry terminal and back to 125th Street up First Avenue.

I’ve filed the photographs in a concertina folder, one pocket for each location and I hope to revisit and add to the file as time goes on. You can see the photographs here…. Gone. Now?

You’ll notice that I have added text underneath each photograph. The cross streets so that you can find each site (should you want to!). I have also added links to articles that correspond directly to the site photographed or that speak more generally to the current atmosphere on development, preservation and gentrification. If you live in New York you’ll be aware of many of these discussions. If you live elsewhere I think these articles will give you some insight.

I’ve photographed vacant lots but their silence speaks to more than emptiness.