Life that’s what. People, places. How we are, where we are, how we make our way through our day, through our environment. Mentally, physically and of course photographically.

We are six photographers. We didn’t set out to create an exhibition, but we gravitated together at a fortuitous time. We’ve got to know each other’s work, and each other, over the past few years, which is a feat as we currently live in the USA, the UK and China. We will be presenting photographs capturing life in the USA, the UK, France, China and Japan.

Despite the geographic distance and our differing genres, landscape, portraiture and documentary, collectively our work interlinks with the exploration of social themes. Our images cut across the divide of distance and culture, as we reveal our use of and the role of photography to understand the world and our place in it.

This is not a group show in the usual way, a curated theme we all submit a couple of photographs to. We have taken over a floor of Bank Street Arts, consisting of 5 separate galleries. Each gallery holds different sets of work so in effect you are seeing six separate photographer’s exhibitions consisting of 10 different bodies of work.

There is though an incidental large-looming central theme running through all of these works. The pulling of the viewer into the reading of each image. We as photographers aren’t making statements so much as asking for your interpretative viewing.

What follows is the briefest of introductions to some of the work that we will be showing at Bank Street Arts.

Rob’s luscious woodland images in A Forest expose the beauty and richness of nature and then he trips you up with the decanted unnatural objects he stumbled upon and then juxtaposed with the forest scene. The pairing of the two photographs invites you to put the object he pulled out of the scene back in as you imagine what led it to be there in the first place thereby discovering a third, latent image in your own mind.

I take this idea a collaborative step further with one of my two projects, Untitled. I present spaces that are purposefully made for rest and contemplation. The settings vary though and one person’s calm oasis is another’s awkward reminder of an experience gone by. As the viewer you share, through captioning my photographs, what thoughts and connections you make when you encounter these images. This project is an extension of a previous online collaboration. Does the gallery space affect how these images are received, I hope to find out.

In my second set, Walking the Gamut, I lead you through the pedestrian’s experience of navigating construction where new obstacles and routes are thrown up inhibiting easy access and creating a confusing array of colours and shapes. This theme of access is continued in an exploration of another point of view by Pete.

As a wheelchair user Pete takes us on another path as he re-presents a familiar city landscape. Through his viewpoint and experience Pete helps us reassess access within a landscape that we see but do not understand in the same way as a physically impaired person does.

Whilst Pete shares much about himself, we get a real sense of him and his engagement with the world, he does not use portraiture through the three projects he presents. Pete is not asking that we look at him but that we experience the social landscape as he does. His work looks outward to the world he encounters and gives us a new way into it.

Keith, perhaps the opposite of Pete in mobility, is an Ironman. His works in [( 6 )] focus on people that are active participants in this strenuously physical lifestyle. Rather than show us the subjects as they are competing, which is perhaps what we might expect from a group of people obsessed with physical activity, Keith instead uses classic portraiture techniques to distill the essence of each subject. Questioning whether we can see the spark that makes them Ironmen (and women).

Whereas Pete is stilled by his impairment yet fights to be mobile, Keith’s subjects are stopped from their activity and made still in a studio setting. Presenting two bodies of work, in the first, I am an Ironman, Keith photographs himself repeatedly after finishing training a time when he barely has the energy to even pose. This presents us with a conflicting view of someone who is incredibly active and strong and yet is reduced to such a state of exhaustion that he appears immobile.

Finally, we look at the work of Dewald and Nigel who consider how the environment affects mental as well as physical interaction as they find themselves in a landscape that is culturally different than their own. Nigel’s work is concerned with transience and transitions. He presents here, in a departure from his usually studio based work, the aftermath of the Tsunami on the north east coastline of Japan after the wreckage had been removed. Nigel’s work shows an in-between time where life is unresolved. The debris has gone but normal life has not yet resumed and may not. The once populated area seems to be suspended indefinitely. With the rich blue tones consistent throughout each print we are lulled into the beauty of the sky and landscape, only to feel the blue as melancholy when our eyes fall on the disrupted urban structures.

Dewald also has a particular colour palettte, one that is slightly muted. It bestows an ethereal presence on the tranquil spaces Dewald discovered in the otherwise gritty urban landscape of the Suzhou ring road. More than just a exploration and document of the road itself, Ring Road exposes the need to step out of the onward flow in the busy city and take the time to assess the moment. Dewald perhaps has discovered on his walking quest of where the road goes that ‘the journey is the destination’. (Dan Eldon)

[( 6 )] kicks off at Bank Street Arts in Sheffield, UK with a private view on July 9th where you can meet four of the photographers. (let me know if you didn’t get an invite). The exhibition continues from July 10th until July 19th. You can download a flyer with the exhibition details and get a taste of each photographer’s photographs over at: 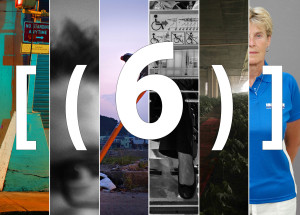