Finally! It’s been a couple of weeks since the exhibition I was in with 4 other photographers finished its run and I’ve just managed to get my exhibition photographs online! If you couldn’t get to Reading now you will have a chance to see what was up.

I had two sets of work in the exhibition.
Very different from each other but both concerned with change, time, the times, distance, place, technology, photography and relationships. So not too much to consider there!

Syncretize is my thoughts on living life between two places over thirty years and how that affects my relationships with people and place. This is a different sort of project for me but one that has been very rewarding. Especially when the subjects of my photographs visited the gallery to see their own photographs. That made my day. The thirty years came full circle.

Postcards of Reading was, at the beginning of the exhibition, a set of postcard sized prints from 1985 that were taken in the Newtown area of Reading (where Berkshire College of Art & Design was, and also where the Turbine House is). But, during the run of the exhibition I  went out with my camera and some other photographers on a few photo walks. This resulted in some new images from all of us that were shown in a pop up exhibition on the last day of the show.

Although I have been to Reading since I left college this was the first time in 30 years I had gone back to photograph in the same area. It was such an amazing thing to do. The area still has basically the same layout so it was familiar to walk around and having the old photographs to hand made it easy for me to see some of the changes. Particularly how much the trees had grown around the water tower! Of course I could see that some things had changed without photos- The Dove for instance is now newly built housing.

Although I had old photographs with me I didn’t want to produce the same images again. Although I must admit to a thrill of excitement when I found the phone box and the house with the steps and did photograph them as I had originally!

Photographically I wanted to bounce around several ideas in this project. I did want to show change between then and now, but I also wanted visual links between the old and new images, in effect answering the old images with a new one. But not necessarily by photographing the same thing. Also the new photographs suggested other things to photograph. I also wanted to show different areas in Newtown. In the old images I photographed more people and spoke with them. This time I didn’t photograph so many people and only spoke with one lady, who posed for me. This was a big change over the thirty years in what I like to photograph, I don’t really photograph strangers anymore. I also photographed the riverside. I much prefer the built urban environment over nature but really wanted to fully show the area. The images on the website are the ones that I showed at the Turbine House. I have more though, so expect to see a few materialize in the future.

I am also starting to post the other photographer’s images (and some of mine) on tumblr. Don’t forget if you can get to Reading I’d love to get a postcard – see the tumblr for details! –

The exhibition website for info on the photographers who exhibited with me at the Turbine house: Richard Pinches, Dave Willis, Darran Gough and Peter Cole is –

Let me know what you think. Is it the Reading you remember or how you imagined?

This is now – it is still there!

Previously I posted a photograph of the gas tower in the Newtown area of Reading that I took 30 years ago. Previous post,

Now I have photographed it again…

In fact during the exhibition in Reading several people were drawn to take photographs of it for my Postcards of Reading 2015 archive project. To showcase these images I have started a tumblr. From today, each day I will post a new photograph taken in Newtown, between 25th July 2015 and the end of this year. I’m going to start with photographs of the gas tower.

If you would like to get involved, why not take your camera and walk around Newtown! Mail your postcard sized photographs to me, you can find address details and all the photographs (eventually!) here: Postcards of Reading 2015 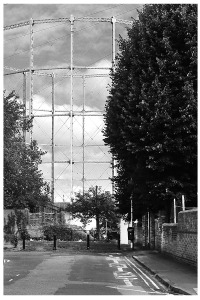 This fortnight’s photo was taken on the London Road in East Reading, Berkshire, UK.
Taken during the two week run of the exhibition, Reading: A Start & A Return, a homecoming 30 years in the making, which ended last week.

This area of Reading, known as Newtown is where I attended college 30 years ago and spent my time walking and photographing. During the exhibition I walked and rephotographed this same area as a way to reconnect with both my photography roots and the area. The built environment has stayed substantially the same, with regards to street layout etc. Some individual buildings have been replaced, the Dove Pub, for example, was knocked down and housing erected in its place. Some new housing has crept into spaces around the edges but the overall area remains easily recognizable and in tact.

Two political events however, the expansion of the European Union in 2004 to include Poland and the 2009 decision to allow Gurkha soldiers permanent residency in Britain, have altered the demographics in Newtown.

The Nepalese community became evident to me through small details as I walked around. I began to notice manifestations of the Buddhist faith on windows, doors and cars. Statues of the Buddha, solar powered prayer wheels on car dashboards, and scarves over doorways and in windows.

For me these three stores nicely sum up both the demographics and the fact that these communities have been absorbed into the existing built environment of Newtown.