Went out with a few of the ladies at PWP for some night shooting in Central Park. Thought it’d make a change getting some trees n’ stuff… well I got some leaves and water in the cityscape and there’s some rocks and a bush in front of the gazebo… 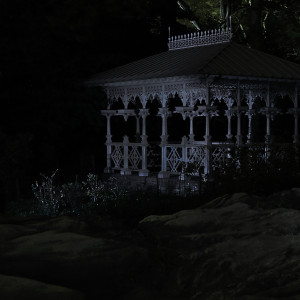 Recently I had the good fortune to attend a slide show of Lori’s work with Lori herself giving the commentary. You may have seen Lori’s work already, she is a photographer who specializes in creating and photographing dioramas. This image, ‘Library’, 2007, from ‘The City’ is probably the one that has been the most widely disseminated and is one of my favourite pieces. http://www.lorinix.net/the_city/16.html, Of course the subway train is a New York favourite. http://www.lorinix.net/the_city/07.html

I was very interested to hear about Lori’s studio. Along with her partner Kathleen, Lori constructs dioramas that sometimes can be big enough to climb into and she often paints the building wall behind as the background. They live in Brooklyn, New York but do not actually have an artist’s space. They use the living space of their apartment, with diorama’s taking over the living room and the kitchen table that has apparently recently been lost for several months.

As the sets take from several months to fifteen months for the longest one yet, Lori and Kathleen live with their projects as they take shape and one reason they take so long, aside from the intricate detail, is that they both until recently held full time jobs. Lori was a professional colour photographic printer, very useful for her large prints(!), but after having received a Guggenheim award she is now doing her own thing full time. Lori is a poster woman for dedication.

It doesn’t appear that Lori, or Kathleen for that matter, have much time for themselves. At the event, she remarked that even when Kathleen went home to her mother for Christmas Kathleen still spent time making up the little books that we see in ‘Library’.

That is not to say that they are total perfectionists. The dioramas are not perfect models, they are prepared from the point of view of the camera and so sides of the objects that will not be seen in the final photograph are unfinished. Because of this and the lack of space, once the photographs are taken, the models are usually thrown out.

Lori has a unique vision and talent but as we all bring our own thoughts when viewing art work I was surprised at just how dark Lori’s vision is. I didn’t realize Lori’s work is all about apocalypse and the like, she cited Planet of the Apes, the end beach scene in particular where the Statue of Liberty is buried, as an early influence. I see the images as decay and time passing but had not picked up on the depth of Lori’s feelings. She is engaging, animated and has a sense of humour but clearly has an intense interest in the end of the world as we know it. Having looked through her website and seeing her multiple bodies of work it seems very clear to me now.

Lori also talked about the process that she goes through from idea to final print. Starting with taking photographs, for example of the interior of the Natural History Museum. These are then used as guides for composite sketches and paper models. Lori checks camera positions and lighting and the set building becomes more intense. The scale goes up and down according to whether a bought piece is introduced into the set. If there is no bought piece Lori uses a drawing of a man to work out the scale for each piece.

Lori remarked that she is drawing inspiration from New York City, something I can associate strongly with (!) and worries that after the City project she won’t know where her next inspiration will be drawn from. Perhaps she will have a change of direction from  making the sets as her own art work and story and head into the commercial set building world. Lori has been commissioned to produce a piece for someone else for a video shoot and has shown one of her dioramas as an educational piece in a museum and so although she considers herself a photographer who creates dioramas, people are very excited at her set building ideas and skills. It will be interesting to see where Lori’s work will go next.

I’m not sure what it is about this photograph that keeps drawing me in. Maybe it is the calming colors, maybe the quality of the light streaming through the window, maybe it’s the cabinet or the spot of colour provided by the flowers.

Maybe it’s just the idea of having this much empty space! 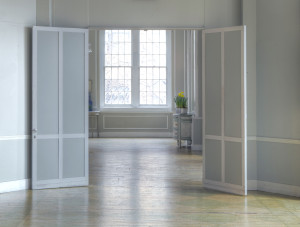