This is the lobby of the New York Times building in midtown. I always think these terrariums are an odd feature, we can see nature but we can’t touch it or be with it or even breathe the same air. Is it enough to just be teased by seeing nature in its closed box? Maybe we shouldn’t bother at all. 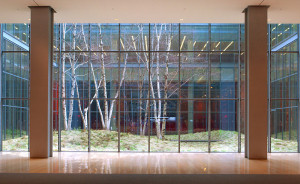 I popped into the 2nd annual Photoville on opening night, September 19th, what a great experience.

If you don’t know what it is – basically, it is a collection of shipping containers that serve as exhibition spaces for photographers or photographic organizations. These exhibitions are then rounded out with talks and classes. The site is on the edge of the waterfront in Brooklyn Bridge Park with a divine view of lower Manhattan and features a 1000 foot ‘photo fence’ displaying several photographers’ series of work. The event is free and inclusive to both the passerby and the serious photographer. Arriving before the sun set and subsequently watching the lights rise over Manhattan I experienced the site in both day and night. There were works best appreciated in one or the other, the images on the outside walls of the containers better appreciated in daylight, the digital projection and TIME LightBox images obviously better in the dark.

And what a projection. Apparently different on different nights, the projection I saw was the ‘Fence’ photos and several series that were almost accepted, honorable mentions. They were all fascinating for both photographic skill and subject matter. The series that really grabbed me though was one from a different genre than usually interests me, that of surfing photography. I haven’t found them online to share a link with you which is a shame because they were underwater and really amazing. Another one was a diptych where a man and a woman were photographed and then in the second picture they had stayed in the same place but had switched their clothes- funny and interesting thinking about the cultural baggage we attach to how we drape pieces of cloth around us.

Of the many amazing collections exhibited in the containers, far too many to discuss in detail, I was particularly drawn to these four.

My favourite, Ocean Beach by Douglas Ljungkvist. Living in Brooklyn and vacationing in Ocean Beach Ljungkvist set out to capture the utilitarian yet beautiful seaside cottages, built in the 1940s, with their traditional and simple decor, before they were all revamped with modern ‘styling’. Serene, calm and with a gorgeous colour palette and definitely evidencing a look of the past, these images suddenly take a turn when the destruction wreaked by Hurricane Sandy destroyed the neighborhood. Ljungkvist carried on photographing with the same delicacy and form but what was left of the cottages changed the images from an almost surreal fashion and time-gone-by portrait to a record of savage destruction and a realization of a time and tradition lost forever.

Without showing broken people or poignant knick knacks Ljungkvist manages to create horror not only in spite of but perhaps because of his gentle tones and formal compositions. To see the jagged, broken houses breaking out of the sand belies the ‘perfectness’ of his style of photography and unsettles the viewer almost unconsciously, not with shock but with a creeping and accumulative melancholy as realization of what happened dawns upon the viewer. Destruction of a way of life and a community.

My next pick, Tyler Hicks: One Year. Hicks trades in shock of the traditional photojournalist style. A staff photographer for the New York Times, Hicks has worked in Iraq, Afghanistan, Somalia, Libya, Syria, Africa and covering the Arab Spring. His images, technically perfect and beautifully composed, hold you in spite of their terrible subject matter. The question that faced me as I looked from images of one desperate child to another is which affects us most. Has the starving child in Africa with his forlorn yet still handsome face lost his pull when we see the dead child carried aloft the crowd in a bombed city and the wretched sadness of the adults carrying him. Have we gone beyond the shock of starving and now respond to blood and anger, or are we still not being moved? Not all of his images are in your face, some are less violent but even those that you have to ‘read’ a little more still force your brain to uncomfortable places. We need these images to bear witness but will man’s stupidity, greed and ignorance ever end? When I compare the images of Ocean Beach destroyed by nature and Hick’s images where lives are destroyed by other men’s actions Hick’s images make me feel angry and impotent. Will his images change the world? Unlikely because man seems to have an infinite tolerance to destroying or taking advantage of the other for the benefit of self. AGGGHHHHHH.

PS Whilst we are in comfortable NYC pondering the art and meaning of his images Tyler Hicks was in the Westgate Mall in Nairobi, Kenya, (where he lives) photographing the results of more pointless violence.

Many of the images on show at Photoville were dealing with difficult or thought provoking subjects. My third pick is ‘Photo Requests from Solitary’. A coalition of organizations worked with Tamms Supermax Prison in Illinois asking the inmates in solitary confinement to request a photo of anything and the group would find a photographer to take it. Not getting into the debate about what these inmates did and whether solitary is deserved or not, just to put yourself mentally in a position where you are so cut off from people for a decade, what would you visualize? As I walked into the container and had a look around two of the images struck me, one an inmate’s picture superimposed on a big blue, sky with fluffy white clouds and another of a crowd of people. Both fairly obvious requests I would have thought but imagine not being able to encounter either that freedom or the ability to be with so many people. The clown and the horse were less obvious choices and perhaps speak to another way of thinking that separation forces on people. The exhibition was staffed by people who had been in solitary, had family in solitary or advocates against isolated confinement so the photographic project was impetus for a larger discussion on human rights. An interesting use of photography to enable a way of trying to understand a life style so different from most of our experiences.

Finally what photographer doesn’t love a photo book. The Indie Photobook Library had a container too with a selection of its collection on show, 70 books and some prints, a ‘A Survey of Documentary Styles in the Early 21st Century’. If I had had more time I would have read each one there, as it was I handled a few and was attracted by a small book full of greenery with extra thick pages, it felt really good to hold, like one of those kids books that can handle a bit of chewing at the corner, of course I immediately forgot the photographer’s name, so if you get down there and see it let me know!

Did you go to Photoville? What peaked your interest? If you didn’t go what do you think of the work I shared here?